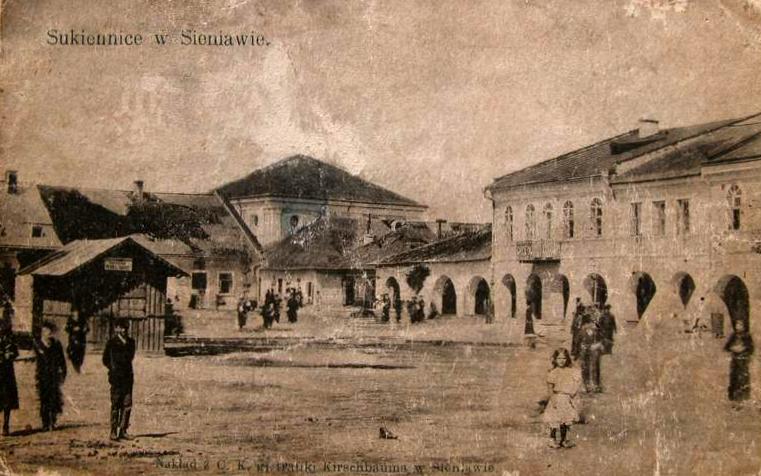 The market square in Sieniawa

With the pleasantly warm and sunny month of May, our genealogical journey to Galicia was painted verdant green and sky-blue. This time I went on the trip with David and Eleanor from the US. The preparations themselves took a few months, during which I gathered materials concerning two Jewish families, the Stelzers and the Bluchers.

The families I searched for had lived near Sieniawa and Jarosław, but their members, or at least some of them, had been fortunate enough to escape the poverty-stricken Galicia and migrate to the US at the turn of the 19th and 20th centuries. I was tracking down the history of the families that roamed the muddy trails and weather-beaten cobblestones of what once used to be the poorest region in Europe. For several generations the Stelzers had tilled the poor soil in Dobcza and eventually settled down in Sieniawa, a small shtetl located right at the border between Austria-Hungary and the Russian empire. The Bluchers, who also subsisted on farming, lived on the other side of the San River. They made ends meet selling vodka and like many other Jews at the time ran a wooden, thatched tavern. Unfortunately, such taverns are no longer to be found in the area.

Genealogical research in this region of Poland proves quite difficult. Sieniawa and its surroundings lost the lion’s share of its archive documents in the war. While Galicia’s tragedy in the 19th century was its perpetual poverty and underdeveloped economy, in the 20th century it was the wars that left their imprint on the region. The blue ribbon of the San River, which flows across Jarosław and in Sieniawa’s vicinity, was a traditional frontier line between the conflicting sides. During WWI the river served as a border between Austria-Hungary and Russia. 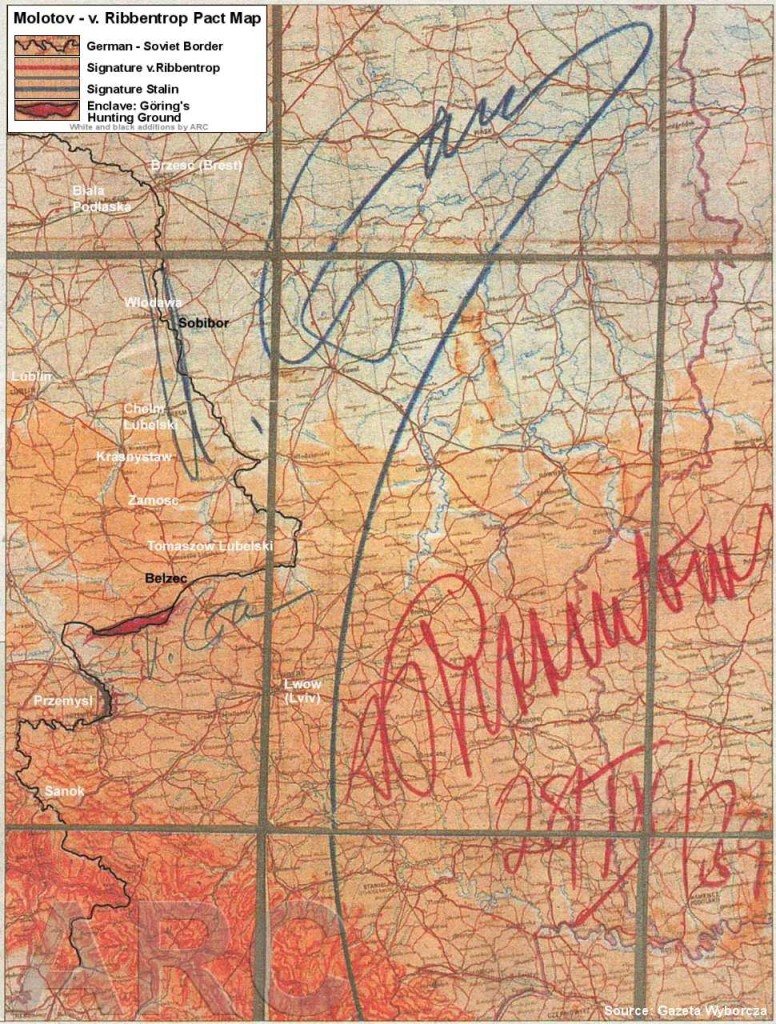 Germans and Soviets split Poland into two parts. A map signed by Stalin (blue pencil ) and Ribbentrop (in red ) shows the Nazi-Soviet border that goes right next to Sieniawa and Jaroslaw

It was also along this river that the Soviet Russia and the Nazi Germany divided their spheres of influence, as had been agreed in the secret meeting between Ribbentrop, Molotov and Stalin, held just before the outbreak of WWII. Sieniawa, because of its ill-fated location, was bound to suffer first in the hostilities. Shelled three times over the period of 20 years, a place similar to this can hardly be found on the map. Each time the town was razed to the ground, its inhabitants learning how to survive in the ruins.

The town’s best preserved street is ul. Piskorowska, where Feiwel Stelzer, Eleanor’s relative, ran a hardware shop before the war. We also visited the beautiful parish church, the place where the synagogue used to stand and the well-preserved Jewish cemetery which dates from the 17th century. The town itself was also set up around that time. 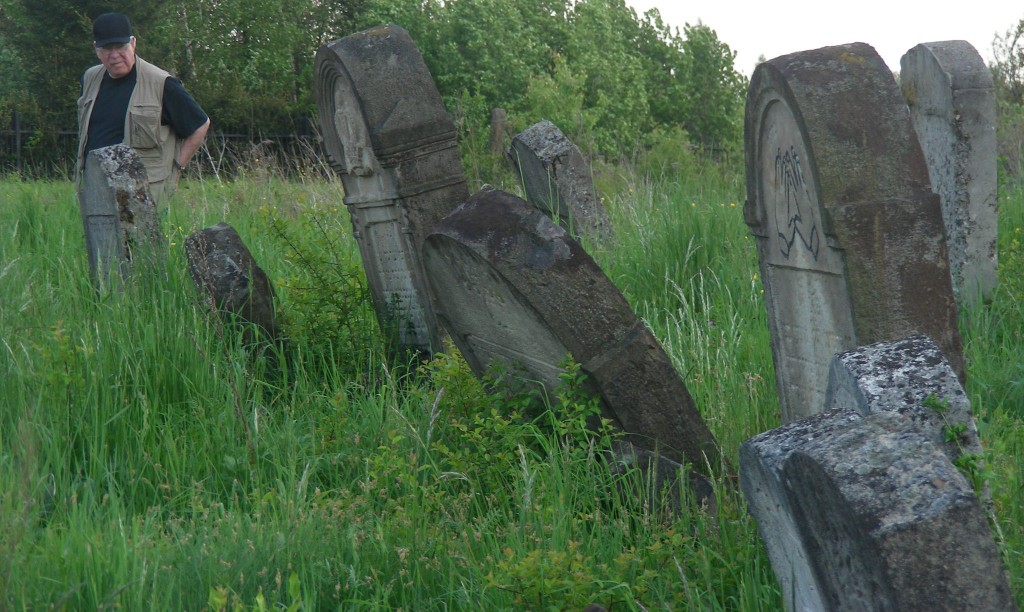 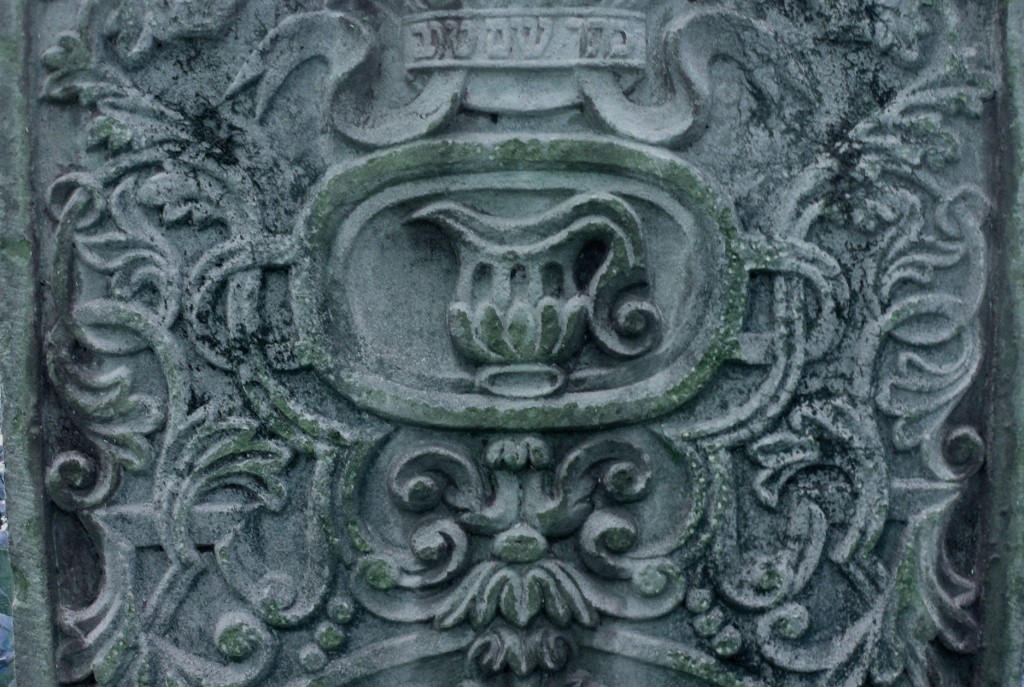 Some Levite ornaments on one of the matzevot

As we roamed the area, we came across many people that remembered the war. We had an extremely fruitful conversation with Mrs. Regina Jarosz from Sieniawa, who could recite from memory the names of her Jewish neighbors that lived there before the war. 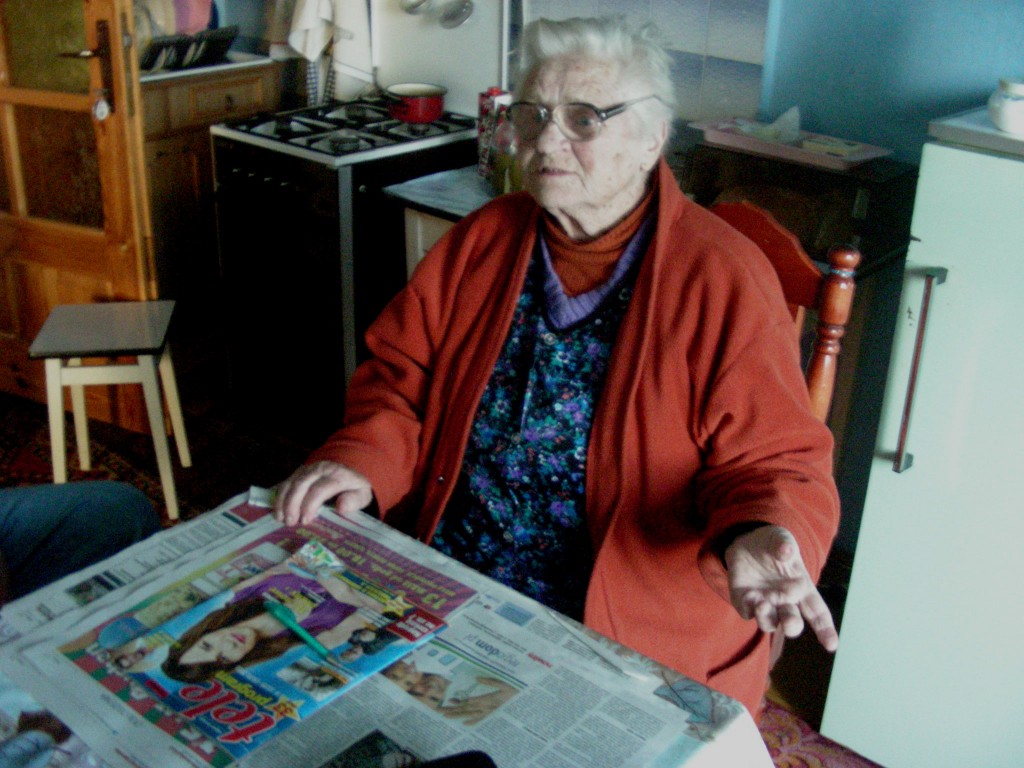 During the Holocaust the Jews from Sieniawa and its vicinity were driven to the local ghetto and shut off behind a three-meter barbed wire fence. Mrs. Jarosz, a child at the time, lived right next to the ghetto’s border. As the Nazis imposed a levy on the town’s residents, she had to carry milk to their headquarters. On her way, she used to pass by the ghetto. “I still remember mothers who stood behind the barbed wires, begging. On the sly, I always tried to pour some milk into their pans,” said Mrs. Jarosz.

One day the Nazis announced that they needed people to work. In so doing, they wanted the Jews to turn up of their own accord. The wagons driven by the local peasants took the Jews in two different directions: some of them went to the nearby concentration camp and place of executions in Pełkinie; the others were taken to the nearest train station and from there transported to the gas chambers of the Bełżec death camp. In 1942, when the ghetto went into liquidation, the German and the Ukrainian militia went from door to door, murdering those who managed to survive. The dead bodies were heaped on the wagons and buried at the back of the Jewish cemetery. Many people were hiding themselves in the area. Some of them even dug burrows underground; they extended the cellars in their homes and used them as hide-outs. After some time they were caught, however, especially by the Ukrainians, who turned out to be particularly overzealous informers. “I remember the Ukrainian village leader who, one Sunday, on the way to church, went to the police and denounced a Jewish woman that had been spotted in town. The horde of policemen chased her and shot her in the fields.”

After the liquidation of the ghetto, the Jews who survived and tried to hide themselves and got caught were shot at the cemetery. In many cases, however, they were executed and buried on the spot. Sieniawa abounds in such places.

We could also listen to the harrowing tales of war in Dobcza, the village once inhabited by the Ukrainians who were brutally pacified by Polish resistance fighters after the war. 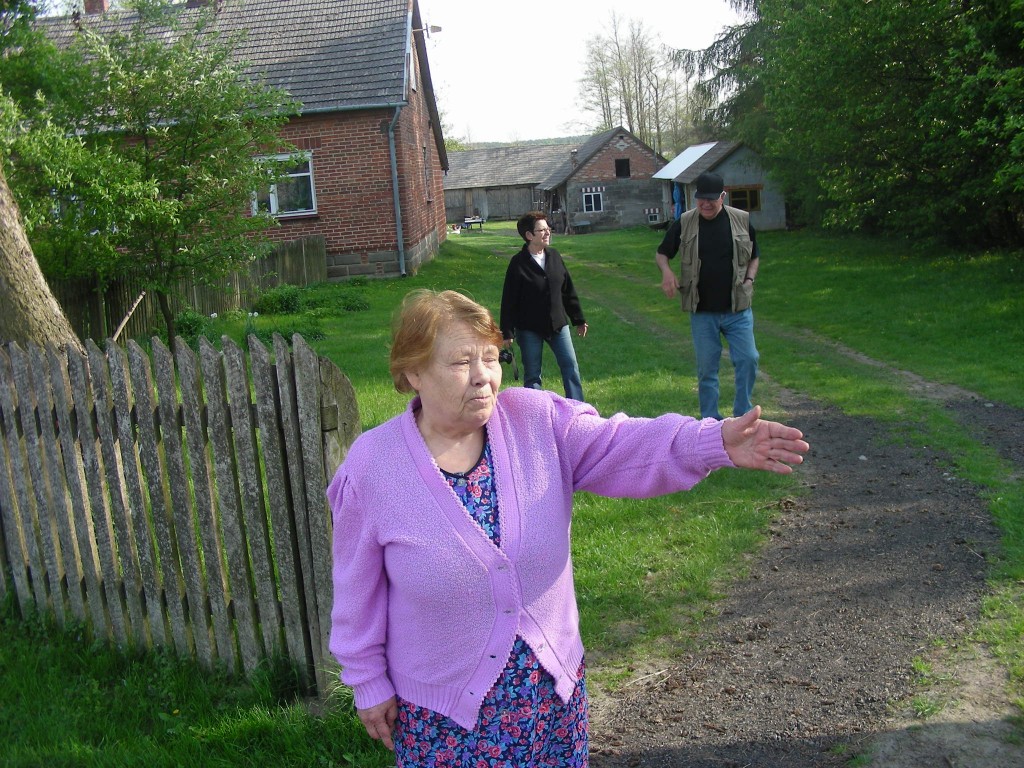 Searching for Jewish traces in Dobcza. Only several houses survived the post-war destruction by Polish partisans. 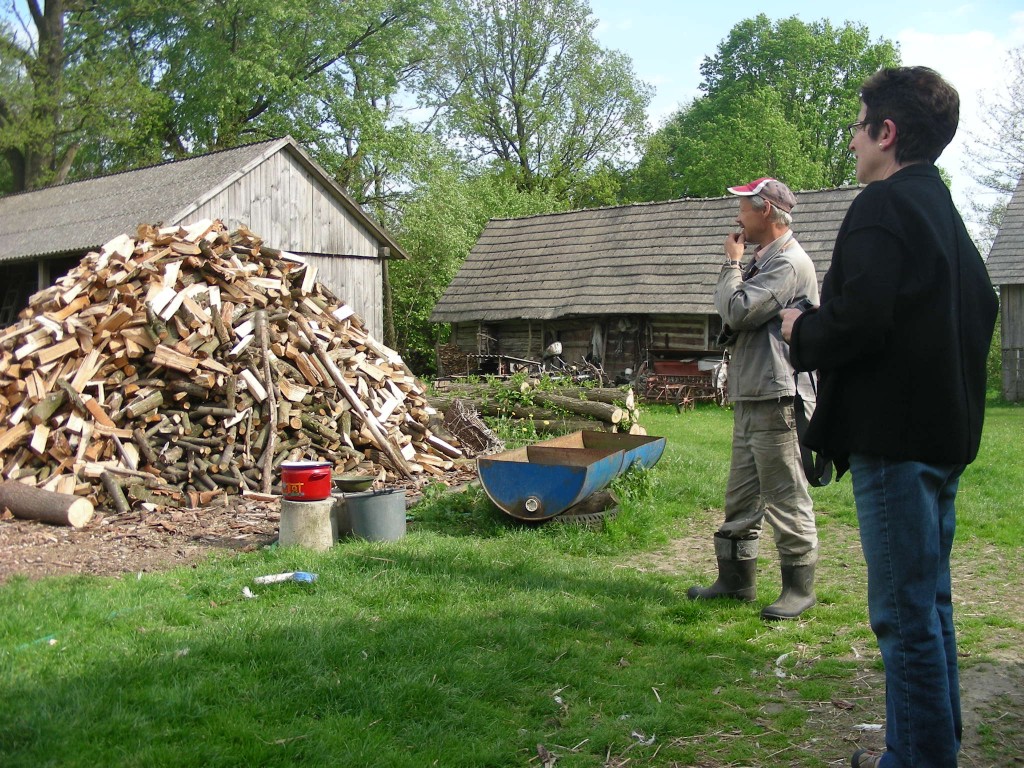 A farm in Dobcza. The house in the backbround remembers the old good Franz Joseph

To take a breather from the atrocities of war, we stayed overnight in Sieniawa, in the beautiful Czartoryski Palace. However, the war-time history was not to be escaped there, either. What is now a palace restaurant during the war served as a hiding place for the three most valuable oil paintings to be found in Polish museum collections. The works in question, by Leonardo da Vinci, Raphael and Rembrandt van Rijn, were unfortunately discovered be the Nazis. 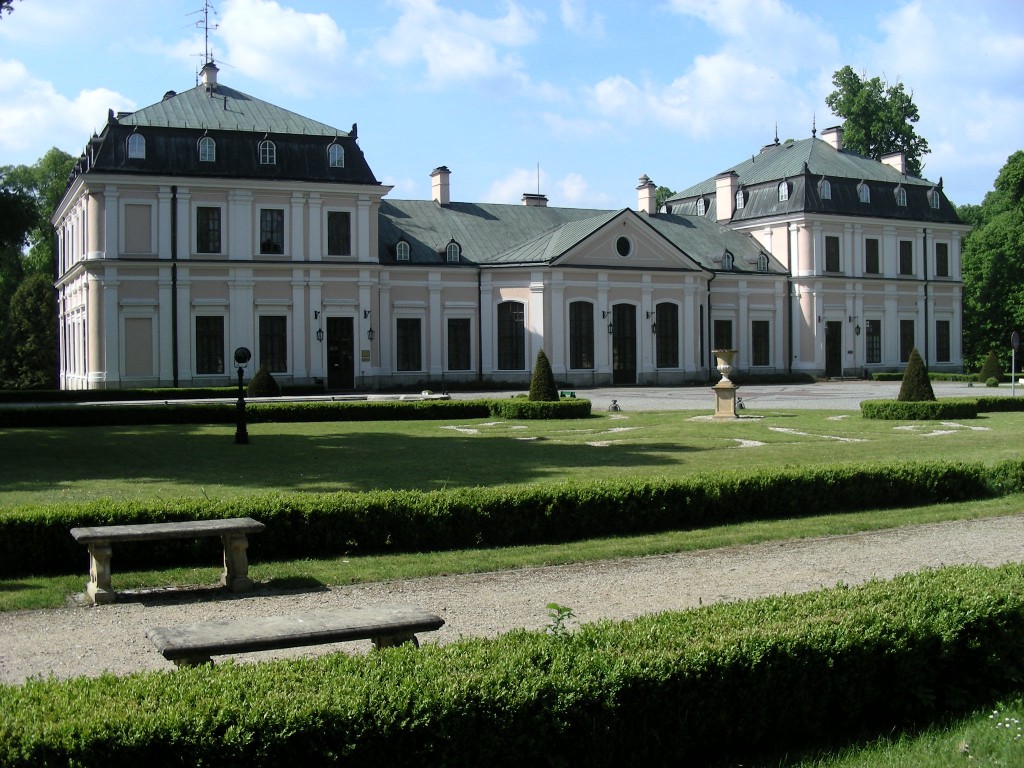 The Czartoryski palace in Sieniawa

On the following day we set out toward Wola Buchowska, the village where Eleanor’s grandmother and her family came from. We also visited Jarosław. This beautifully-preserved town boasted four synagogues before the war. Just as enticing nowadays, it nonetheless lacks the hustle and bustle of what once used to be a vibrant shtetl.

The Old Town of Jaroslaw

Other family names that appear on Stelzer & Blucher family tree are: Kirschenblut(h) from Debno, Frieder from Mikolince, Friedman (wife of Feiwel Stelzer ), Trinczer ( from Przeworsk )